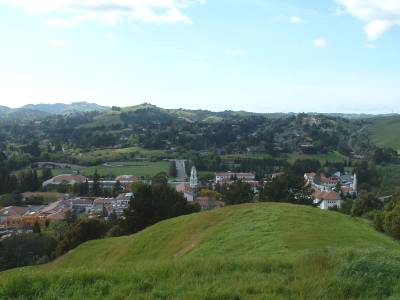 Moraga is located at 37°50'06" North, 122°07'47" West, at an elevation of 499 feet (152 m). It is located adjacent to the cities of Lafayette and Orinda, as well as the unincorporated community of Canyon. Other nearby cities include Walnut Creek, Oakland, San Francisco, Concord and Berkeley.

According to the United States Census Bureau, the town has a total area of 9.4 square miles (24 km2), of which, 9.4 square miles (24 km2) of it is land and 0.09% is water. Originally Moraga was abundant with pears, however, over the years more houses are being built and it is losing its pear trees. The old orchards are now reduced to but a few acres. Rimer Ranch has begun planting new fruit trees on the south edge of town.

Moraga is in a valley, surrounded by rolling hills (green in the winter, brown in the summer) and grazing cows. Residents enjoy walking or biking many trails in the Lamorinda area.

Moraga is well known for its school district, which attracts many people from surrounding cities, such as Berkeley, California, Walnut Creek, and even as far away as Antioch, California.

Please provide your name and email

Thank you for contacting us, we'll get back to you shortly.

Sorry, we are unable to send your message at the moment. Please try again later.